CIVIC SQUARE is passionate about co-creating communities and neighbourhoods’ access to the tools, resources, ideas, capacity, inspiration, and connections to help us collectively to engage, participate in and fight for a just, equitable ecologically centred transition. To do this, they are working to reframe, reimagine and rebuild the 21st century neighbourhoods with neighbours and partners across the country and world, to rethink and remake what good infrastructure might look like. They have been awarded £4,974,000 for a transformational and long-term project over a period of ten years (just under £500,000 per year) by The National Lottery Community Fund, the largest funder of community activity in the UK.

Co-founder and Director of CIVIC SQUARE, Imandeep Kaur, explains that, “the signs of a historical transition have often been identified by the soft and hard infrastructure society puts in place. According to Imandeep, “these infrastructures - like the NHS, libraries, and those we don’t see by communities around the world from micro saving to mass people mobilisation - are sites where people can gain access to the tools, capacity, confidence, their peers and skills we need to all do things like decarbonising neighbourhoods, or bringing community spaces back into the commons, or rewilding and rebuilding our relationship with nature, and nurturing for biodiversity.”

Rather than a means to discipline and control communities - creating a set of compulsory behaviours, or single ways, mindsets and frameworks - Imandeep believes we need infrastructure which enables emergence, imagination and many distributed routes through with access to tools, resources, ideas, and each other. Neighbourhoods alone cannot make the scale of change required, but without them, without people at heart of the shifts we need in the next decade, we risk not being able to step up to our societal responsibilities, or relying on centralised top down approaches alone.

With this infrastructure, she says, “human and more than human ingenuity will build a new future which will be more playful, more careful, will centre healing, will return us to our relationship with nature, will help us to understand what it means to go beyond goals like GDP for measuring progress, to think about intergenerational care, to come together for ideas big and small - like polytunnels at the end of the street, or streets prioritised for children and play with cars available for accessibility to whole systems reform, redesign from food, land and more.”

CIVIC SQUARE seeks to demonstrate what that infrastructure could look like in practice, a place you can see and feel the movements we need in practice: from the physical places, to the regenerative economics labs we need, and creative and participatory ecosystems with the local communities and neighbours, recognising deeply all the viewpoints and contradictions that, that brings.

A big element of CIVIC SQARE’s future, which sits alongside the National Lottery funded project, is repurposing and retrofitting a large set of industrial buildings in their part of Birmingham to create a co-designed, co-built neighbourhood public square. The space will hold things like a makerspace for making and maintenance, repair and retrofit, community kitchens, neighbourhood cafe, and a range of sites for everyday participatory action and connection. It will be a place that works at the scale of the neighbourhood to co-build whole new economies that centres people, planet, all our species and place.

On the more ideas-based front, CIVIC SQUARE will be developing their regenerative economics lab, using another Growing Great Ideas grant holder, Doughnut Economics Action Lab’s, tools and framework of Doughnut Economics as a compass for 21st century economy. The lab will explore questions like how to keep capital flows within neighbourhoods, and how to share value with those who created it, as well as how to technically and practically return neighbourhood land to the commons for food and play. It will host workshops and festivals to create a movement of people and neighbours reimagining what the economy is for, how the future is finance, and how it might work both in the detail of deep systemic shifts, and in practice in every day, with partners such as Open Systems Lab, Dark Matter Labs, and a whole movement of neighbours near and far.

“This work is about creating momentum, examples, business models, financing models, and deep participation, weaving all those layers of dream matter, dark matter and the ever day matters of giving those future forms with joy and creativity,” adds Imandeep.

It’s also about reimagining what is meant by community participation. “We can’t just say that communities can do nice stuff over here just giving their time, and have other people elsewhere make decisions like unpacking the land system, telling us how to decarbonise, how to grow our food, what our kids need to learn, or simply encouraging beautiful but performative participation. With the participation in a share of the value created by people, by civic movements. Without ownership, long term stewardship, a share in economic value, or more circular models that puts that value into the commons, it doesn’t go far enough. We know this as ideas, but how might we technically restructure our systems, and how might bring them into experimental practice now. Even if we might not sit under the shade of the trees, that we might plant today,” Imandeep explains.

She says that to create a truly participatory neighbourhood, with the power to change the outcome of decisions made about it, there is a need to unpick and radically reimagine the “invisible structures” of society, and do this at pace, the challenges ahead will be like those not seen for a long time.

The challenge with building something new is that it doesn’t always fit with people's expectations of what the world does or should look like.

“You’ll only be able to tell our stories backwards,” says Imandeep. “People shouldn’t know where to place us because we are trying to be an embodiment of what the new economy might be like, with all the contradiction, new language, and mass working out that is to happen. There’s going to be a weaving of the best parts of all the systems and a hospicing of the worst parts, those that no longer serve us.”

CIVIC SQUARE’s work is deeply rooted in place - specifically, in Birmingham, in a part much like the neighbourhoods of the city many of those working at CIVIC SQUARE. “It’s about starting where we are, not getting overwhelmed with the scale of the national and global challenges, recognising them deeply, but starting where we are and doing everything we can to show what the future could look like - spreading the learning and ideas so communities around the world can learn, share, exchange these learnings, stories of hope, action, reimagination.,” Imandeep says.

CIVIC SQUARE is, and always has been, an “open source ecosystem,” says Imandeep. They work with organisations ranging from Dark Matter Lab, to CoLab Dudley, to other fellow National Lottery grant holders, including Open Systems Lab and the Doughnut Economics Action Lab, as well as their local neighbourhood community members. Through sharing with their ecosystem, CIVIC SQUARE has developed its identity, its philosophy, and some of its core pieces of work - such as the regenerative economics lab.

“There is no CIVIC SQUARE without its ecosystem and peers,” says Imandeep. “We are because of that, and that is because of us.”

The Need for Abundant Resourcing

For the ecosystem to be more resilient, Imandeep says there is a need for much more hyperlocal deep investment: for CIVIC SQUARE’s collaborations with smaller projects and communities to be successful, they must all be well-resourced.

Imandeep also sees the need for larger-scale resourcing to carry out the retrofitting and land-work necessary to decarbonise communities, whilst we need the circular finance models to resource this long term, we need quicker big investment to show and shine a light on what could be possible. “We need a whole new generation of construction workers who want to work in that way, they exist but deep creative investment to give life to what green jobs of the future actually could look and feel like will be necessary, turning a crisis into a renaissance,” she says. “We need a whole new generation of land-workers… And we’re going to need it with some real abundance - we’re going to have to flood the space with resources.”

Thirdly, Imandeep says there needs to be significant investment in ideas and social change. She notes how much work it takes to unlearn existing systems and to build teams to work in this space, pointing out the need for open, democratic investment in supporting the development of practitioners who are able to do this work.

On a personal level, it will be immensely challenging for the individuals involved in CIVIC SQUARE - who have their “heads above the parapet,” as Imandeep puts it, building new ideas, stewarding organisations, and looking after the wellbeing of their teams; simultaneously challenging the status quo whilst also existing within it. Such work takes “incredible amounts of human energy, is often highly pressurised, and communities of colour often over scrutinised, or needing to exceptional and without any mistakes,” which Imandeep says will require adequate support to be maintained, not just within their organisation but across the whole landscape of people working in this way

To overcome this, Imandeep sees a need for communities at all different scales - from funders to neighbours. “We are not in it against each other,” she says. “There needs to be solidarity at all scales, whatever the power and finance imbalance looks like - shared accountability and learning towards big goals, however we need to keep resourcing this future in order for their not to be deeply designed imbalances of resource that make it harder to come together.”

“We really have to think about this decade as being the decade that’s going to define what future generations will look back on - and say, ‘they did everything they could’,” says Imandeep. “We need the sector to come together as a whole and start flooding the space, and the work, with the resources, inspiration, energy and momentum it requires to go to that tipping point of new ways forward.”

To learn more about CIVIC SQUARE, go to their website or follow them on Twitter, Facebook, Instagram, or Medium. If you live in Birmingham, or are just passing through, you can go see what they’re doing in person - on a Wednesday, Saturday or Sunday at Rotton Park St & S Loop Park B16 0AE, or join any one of their various festivals, events and learning programmes. 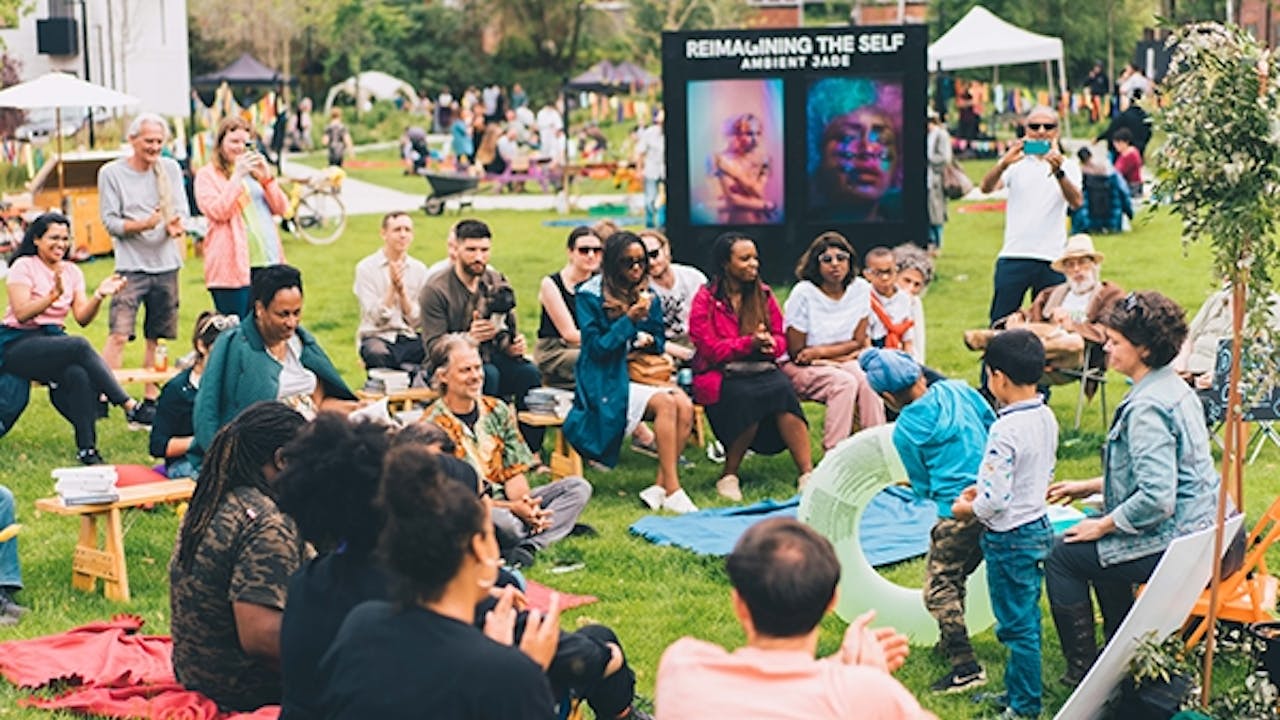