The Doughnut Economics Action Lab (DEAL) was co-founded by Carlota Sanz and Kate Raworth to co-create a regenerative and distributive economy that meets the needs of all, within the means of the living planet. It uses and builds upon the concept of doughnut economics, first developed by Raworth in her 2017 book Doughnut Economics: Seven Ways to Think Like a 21st Century Economist, and is one organisation within a broad ecosystem working toward the transformation of economic practices and understandings.

By collaborating with people and groups across the UK and around the world - grassroots communities, education practitioners, various levels of government, cities and regions, and businesses - DEAL are co-creating tools and resources that build on the core ideas of Doughnut Economics and turn them into “irresistible practice,” as Carlota Sanz, Co-founder and Strategy and Enterprise Lead, puts it. These tools, shared on DEAL’s open-access online community platform, include workshop guidelines, lesson plans that can be used by teachers, policy tools to help policymakers think differently, look at economic narratives differently, and make decisions differently. Now, thanks to just over £4 million in National Lottery funding from The National Lottery Community Fund, DEAL is working on a ten-year transformational and long-term change project* to continue and grow this work.

DEAL has three major goals. First, to use Doughnut Economics - which offers a way of visualising a particular set of values that underpin relationships amongst economic actors, and between communities and their environments - to reframe economic narratives and worldviews. Already, Carlota says, they are making progress towards this goal, as more and more influential thought-leaders and institutions, including the Catholic Pope and David Attenborough, as well as the World Economic Forum and the United Nations, endorse the core concepts of Doughnut Economics.

Secondly, DEAL aims to contribute to structural change by supporting policy regimes and institutions. They are particularly interested in working with businesses, says Carlota, “exploring and experimenting with Doughnut Economics-based tools to create new dynamics within their institutions. There is a big opportunity to engage with the world of business in a way that is open, but while maintaining the integrity of the concepts.”

Thirdly, DEAL is building a thriving, ever-expanding community, with Doughnut initiatives in every region in England - from Devon and Cornwall, to York and Preston - as well as in Wales and Scotland. By 2023, they hope to have a membership of over 7,000 from communities across the UK and around the world, including those in the global South, all of whom are reshaping their local futures using the tools of Doughnut Economics.

“What we’re hearing is that the Doughnut is a very powerful tool to think through very complex ideas and see a much more holistic picture,” says Carlota. “Doughnut Economics, because of its playfulness, is enabling communities to understand economics within a more holistic view, centred around the idea of thriving.”

A Global Ecosystem, Rooted in Place

DEAL’s approach is ecosystemic. At a strategic level, they aim to work with innovators and change-makers who are open to change to trigger and drive transformation in their particular context.

For example, the Doughnut, as originally conceptualised, is a global idea. Over the past year, though, DEAL has created a methodology for down-scaling it to a particular place, such as a city, including a range of resources that can be used by local actors to think more holistically about economic and ecological transformation. Another Growing Great Ideas grant holder, Civic Square, have engaged with this work, putting the Doughnut at the core of their work and downscaling it even further, to the neighbourhood level.

Another key part of DEAL’s ecosystem is the communities who engage with their online platform. DEAL makes all its resources - such as the tools for downscaling the Doughnut - available to communities through the platform. They invite the online community to use the resources, innovate with them, change and adapt them to suit their contexts, and then share what they learn back with the rest of the community. Members are also empowered to create and share their own tools with their peers.

DEAL has found that it is not only pre-existing groups, or leaders, who are engaging with the tools and community they have created. “Different groups and communities worldwide have begun to self-organise to create open groups within the platform to explore what it would mean for them to take these concepts into their places,” says Carlota. “We’re seeing a lot of energy arising from place-based, self-organising groups working sometimes in collaboration with more official city governments, other times in fully grassroots ways.”

DEAL’s commitment to their ecosystem is complemented by their belief in the power of peer-to-peer inspiration. “Change goes really fast when people see someone like themselves doing things they didn’t know they might be able to do,” says Carlota. “For example, mayors will be inspired by hearing about other mayors; teachers by other teachers.” In these ways, DEAL is helping to build thriving local communities using the Doughnut across the UK and beyond.

To continue growing its ecosystem of change-makers, Carlota says they will need to continue building their own capacity as well as that of the wider Doughnut Economics ecosystem. Much of the work that has taken place so far has been carried out within the commons - meaning for the common good, and not subject to any ownership restrictions such as copyright - with much of it done voluntarily. For this work to continue, DEAL’s ecosystem, too, will need to be properly funded, Carlota says.

In expanding the ecosystem, however, Carlota explains that DEAL will have to be careful to maintain the integrity of the Doughnut concept.

“We want to be as open as possible so the concepts can be used in peoples’ contexts, but we also need to balance this with setting boundaries and principles that keep the integrity of the concept in place,” says Carlota. “This is really important, especially in the realm of the business community. We need to set up-front boundaries as to how these concepts can and can’t be used so they are not co-opted. When there’s a transformative idea like Doughnut Economics meeting business as usual, one of them will be transformed. We want to be very careful that it’s business as usual that is transformed.”

To achieve this balance, she says DEAL will need to carefully design its own organisation as well as the way it spreads tools and resources. For instance, training programmes for practitioners may be needed to enable them to engage with institutions without being co-opted or greenwashed.

Ultimately, however, Carlota says that what DEAL most needs to achieve its vision of co-creating a regenerative and distributive economy is for its community to share what they have learned to inspire others and spread the Doughnut ever further.

Find out more about DEAL, (where you can also subscribe to their newsletter), or read Kate Raworth’s book, Doughnut Economics. You can follow their work and join the Doughnut ecosystem by joining the online community platform. 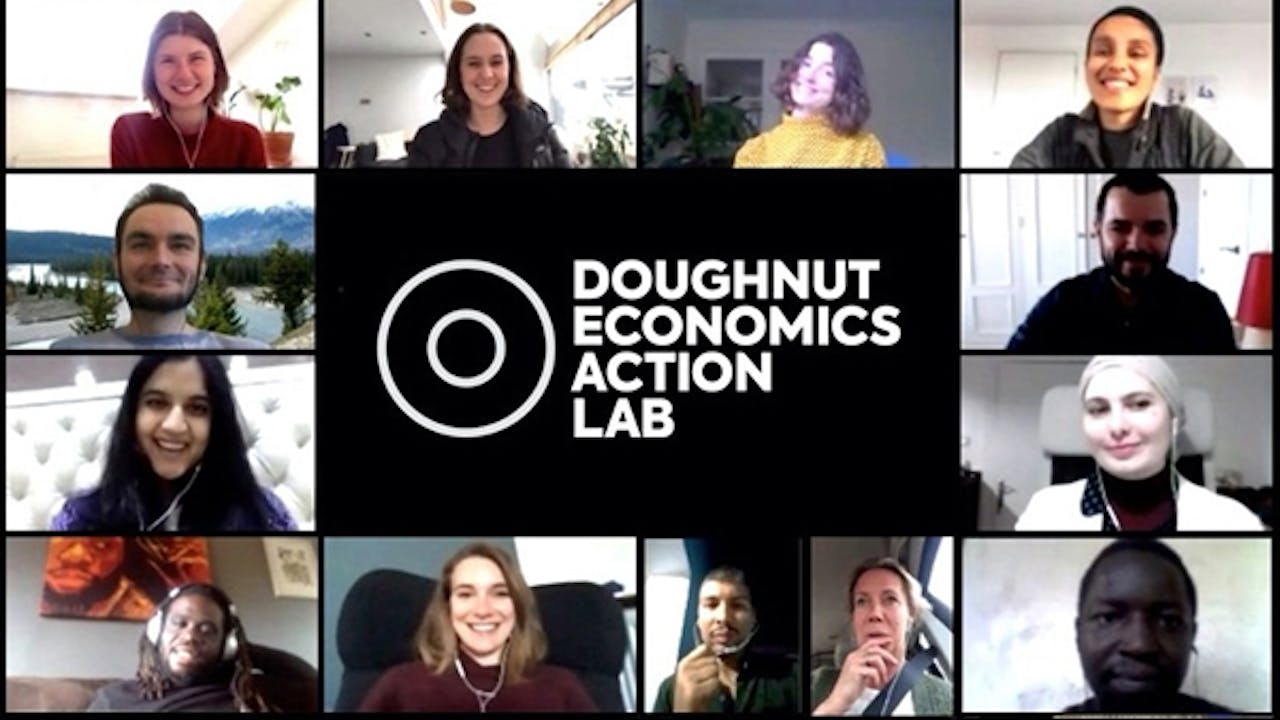